What to expect from a 4-month-old baby? Development milestones Parents compare the level of development of a 4-month-old baby against recognized standards. Any deviations from the standard behavior of a baby, especially a first-born, are noticed immediately and categorized into “good” and “bad”. Before running to the pediatrician, you need to figure out what is considered to be the norm, what the child simply does not know how to do yet, and what are the indicators that you really need to worry about. 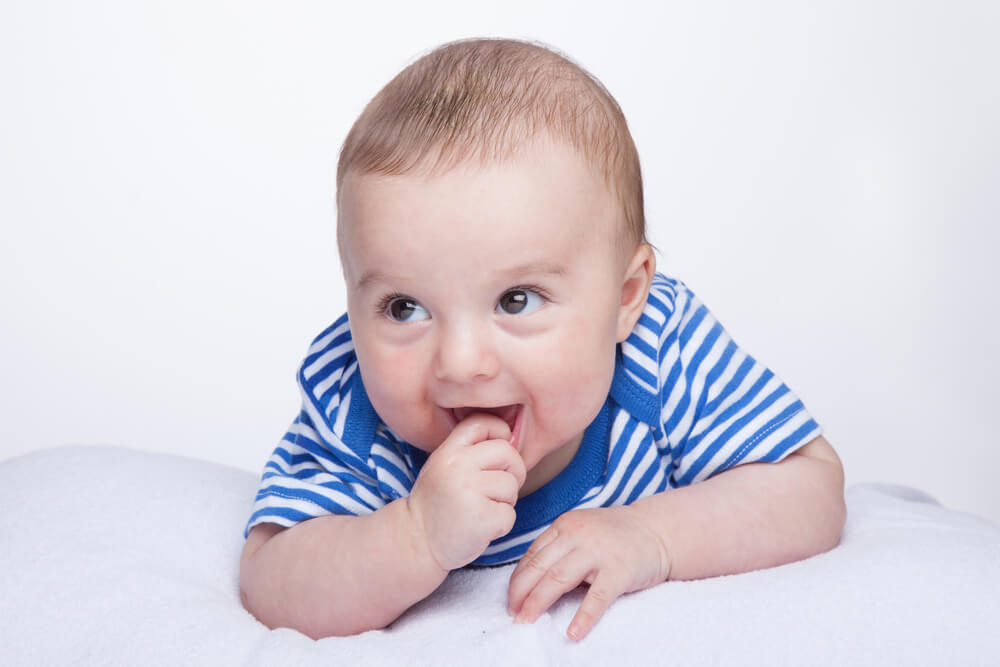 Try to devote the majority of your time not to household chores, but rather to your new family member, especially in the first year of their life.

The baby turns over onto or from their stomach, onto their back, independently or with the support of an adult. They start feeling everything that comes into their hands, and if there is nothing around, they lick their fingers, try to reach their leg with their mouth, or bite their fists. New physical abilities enter into action, allowing the hypertonicity of the legs to disappear. They swing them around actively and try to place the weight of their whole body onto their feet.

Active salivation as an uncontrolled physiological process, becomes apparent, acting as a response of the immune system to the microbes that enter the body with objects that the baby starts to pull into their mouth.

The difference between boys and girls 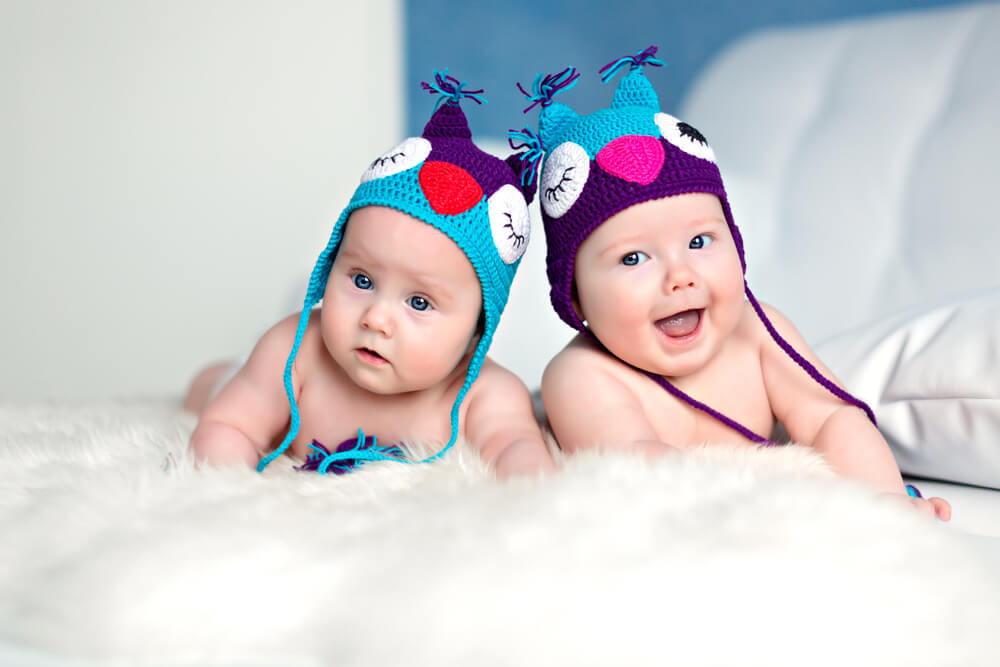 Remember to take the gender difference into account. Girls are ahead of boys in their development in infancy. The norm is a gap of 4 weeks between the two genders. The weight and height of the children would also differ.

Physical development of a 4-month-old child:

Keep in mind that the mass index is calculated using a complex formula. Body mass index is the ratio of body weight in kg to length in the supine position or to the height in the standing position, in meters. If the baby is tall, they should weigh a lot, and vice versa. The weight is proportional to the baby’s height.

The child still spends most of the time in their crib or in the arms of their parents, allowing them to waste little energy, which is why they gain weight quickly. They would have gained an average of 3 kg and grown by 10 cm from their day of birth.

What should a four-month-old baby be doing? 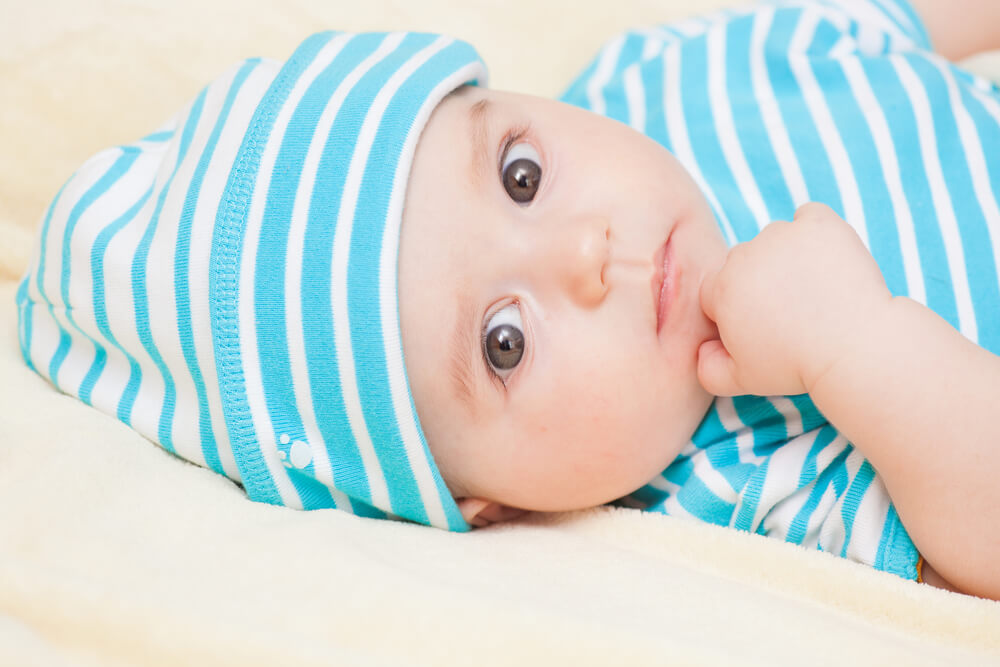 The coordination of eye and hand movements is a priority at the 4th month of the child’s life. 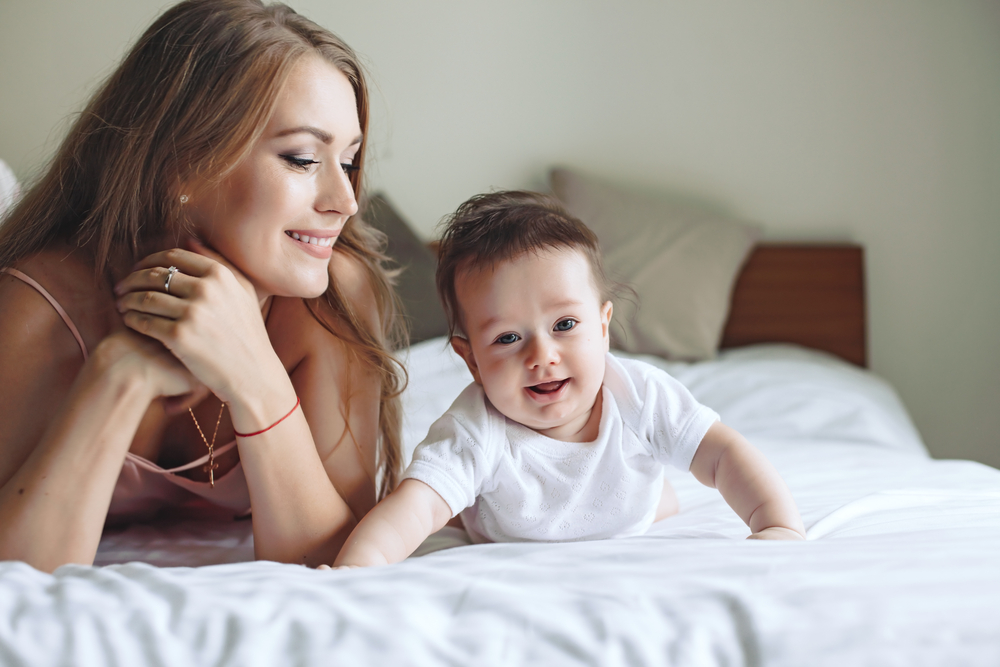 Reflexes that children gradually get rid of:

Each disappearing reflex is replaced with a new skill, a more complex reaction, and a behavioral pattern. The stepping reflex may still be there, as the baby tries to stand on their feet when they are held in an upright or slightly tilted position. The Moro reflex manifests itself when they hear a sharp sound or a blow on the surface near them. Both of these reflexes may remain partially or completely absent. In either case, this is not considered a deviation from the norm. When the first trimester of life is over, the baby begins to take an active interest in the surrounding objects. Foster this interest by taking your child on a “tour” around the house. Show them things and let them hold various objects, whilst pronouncing their names. Flip through some books with large images. While the child’s hearing ear is actively developing, sing some songs quietly or tell some stories to your baby.

The research conducted by the WHO in 2019, recommends the following in order to ensure the psychological well-being of the baby:

Sticking to these recommendations will allow you to raise a psychologically and intellectually healthy child. At the age of 4 months old, the child begins to navigate in space more efficiently and to recognize familiar faces around them. When seeing their loved ones, they smile and move their arms and legs actively, whilst making incoherent sounds to express their joy. They can already determine who their mother is. Parents can also start hearing individual sounds and short syllables that are vaguely similar to the child naming their parents, such as “ma”, as to “mama”. Of course, they still do not say the word “mother”, however, their parents can already start distinguishing the first foundations to full words.

The baby expresses their emotions vividly, allowing the parent to distinguish them. It is immediately visible when a child is happy, angry, or afraid of something. During the day, they actively display an interest in their hands and feet and freeze for a second when someone says their name. The 4-month old baby also feels the music and turns towards the side of where the voice or the sound is coming from.

By the age of 4 months old, the baby’s vision becomes similar to that of an adult. The child starts distinguishing between red, blue, and yellow colors, however, there is no need to tire their eyes and their nervous system with colorful toys. At the age of 4 months, the child is still being breastfed, and if it is not possible, they are formula-fed with the addition of very small portions of vegetable puree or porridge. The addition of more solid foods should be done as prescribed by the pediatrician and with no more than 1 teaspoon of puree per day. Portions of these foods are increased on a daily basis, going up to 100 grams per day.

The frequency of meals becomes gradually reduced. What is now sufficient is a five-times-a-day breastfeeding schedule, with the last one taking place at 8 pm or 9 pm, or formula feeding six times a day with an interval of 3-3.5 hours between meals. After the evening meal, the baby sleeps peacefully until 10 o’clock.

Children gradually move towards organizing a new eating schedule. The transition period can take up to 5-6 months. At this time, they wake up at night to eat. Don’t ignore their needs, but instead of breast milk or formula, give them some special tea for infants or some diluted juice. Over time, they will get used to the new feeding scheme and will sleep until the morning.

The four-month-old child needs to be taught when it is time to be awake and when is bedtime. At this age, you need to adhere to a defined schedule. However, you do not need to follow the schedule by the minute, it is enough to repeat the same sequence of actions every day. 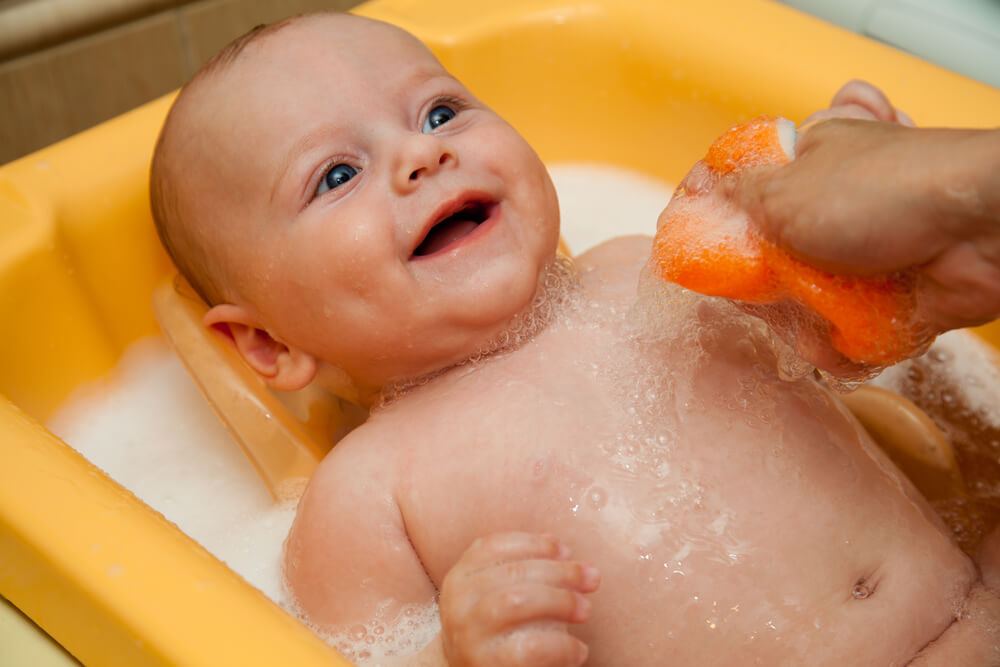 The baby needs to do the following on a daily basis:

Although you can teach your baby to adhere to the daily routine, their nutrition and sleep will depend on their physiology. Children that are born prematurely or on time but with a large weight may be slightly behind their peers. 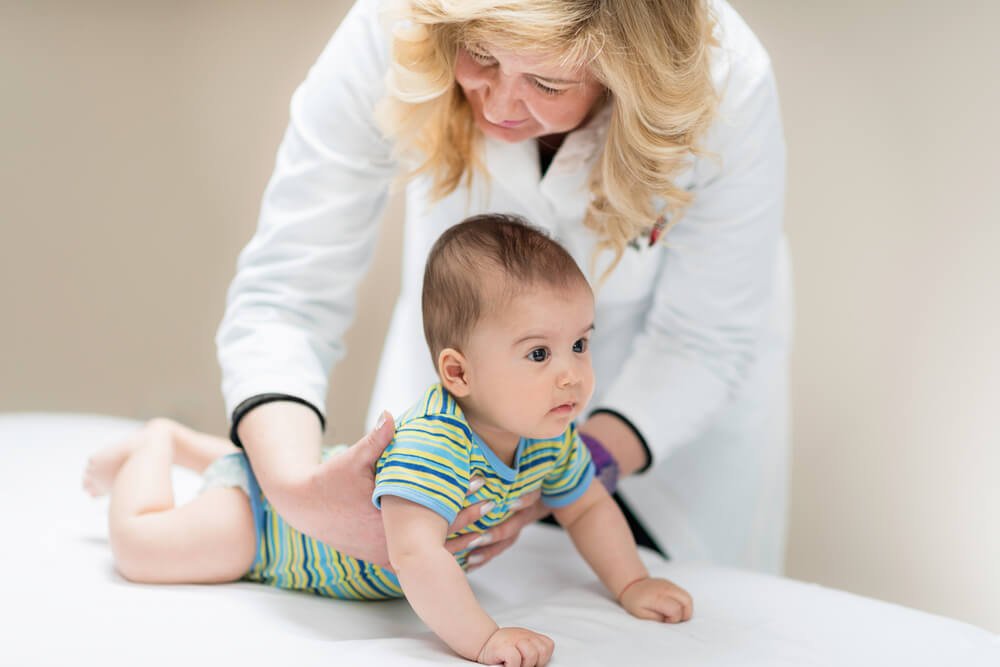 Doctors recommend playing with the child and talking to them more, whilst changing the intonation, volume and the tempo of speech. They are already beginning to become aware of themselves among others and to recognize their mother’s voice. Play some music and let the baby play with musical toys. Encourage your toddler if they display interest in things around them. Here is a video on how to encourage the child to play and how to develop your baby’s brain:

Deviations from the norm that should raise concerns

The emergence of new reflexes and skills in children occurs individually, and surely not in strict accordance with the schedule. You need to worry if they do not appear in 1.5-2 months after reaching the 4-month-milestone. Pay attention to the following factors:

Deviations from the norm can be noticed by relatives or a pediatrician during a routine examination. If your toddler cannot do what they should be able to do at this age, consult a doctor who will refer you to a neurologist for a consultation.

How to help the child in the development? 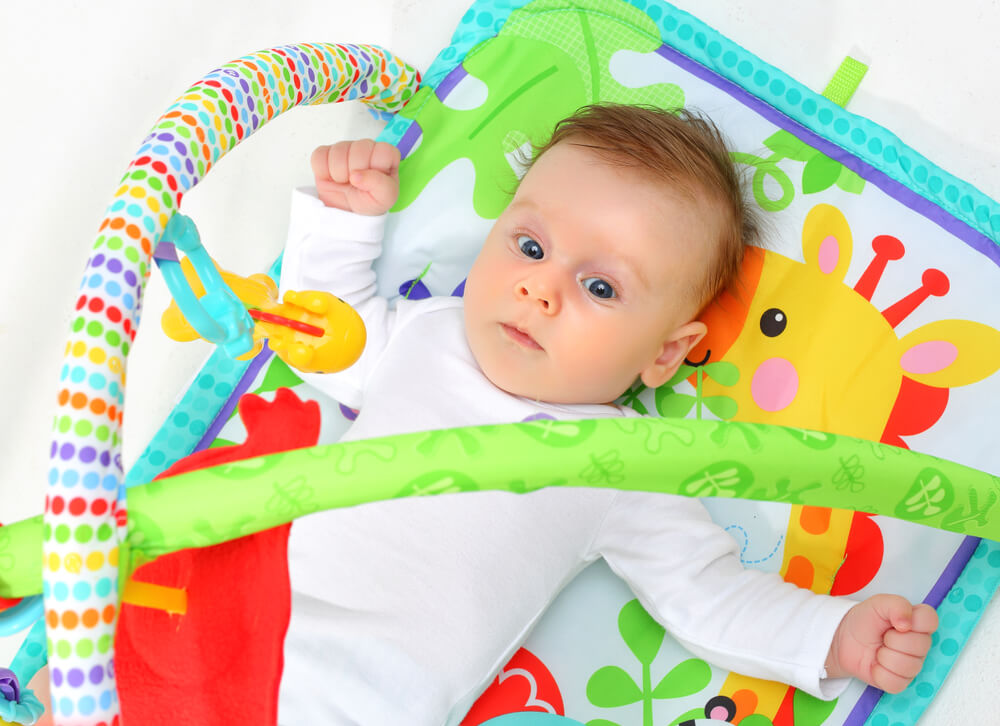 Find out what your baby should be able to do at the 4 months milestone and help them develop emerging skills. During games, even if they are trying to get up as if they were doing crunches, do not let them sit, as their weak spine will have an excessively large load placed on it. Moreover, girls are also strictly prohibited from sitting at this age, due to the risk of improper uterus laying, which subsequently leads to problems with conception and childbirth. A purposeful desire to sit down is formed by the age of 5 months. Prior to that, give your baby some muscle-strengthening massages.

The age of 4 months allows to develop the following:

The time during which the child is awake increases, and it can be spent on games together.

Movement coordination can be developed with the help of balls or rattles hanging over the child’s bed. They should hang low enough so that the baby can kick them when lifting their legs. If it is impossible to hang them, put a toy or a ball in the bed. 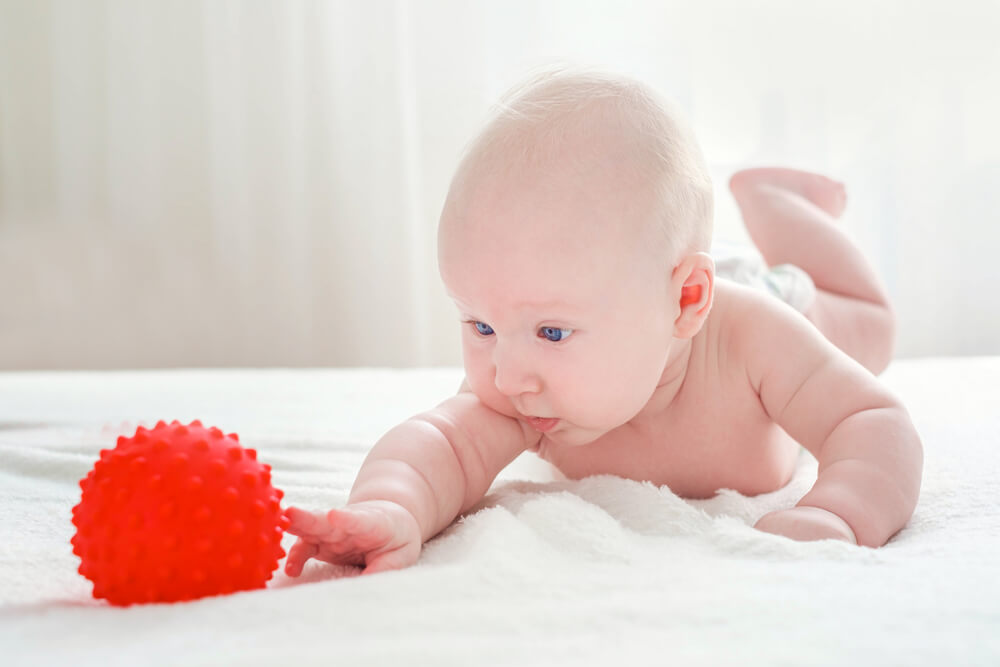 By developing the child’s hearing and attention, you can simultaneously satisfy their need to feel everything around them. Let your baby play with keyboard musical instruments. A toy piano that makes different sounds by pressing the keys will give them a lot of joy. This game will teach the child to associate a sound with finger movements.

Use objects of different shapes and textures to develop the child’s fine motor skills:

The developed skill of recognizing sounds can be reinforced through repetition. Attract the baby’s attention by ringing the bell, and then by verbally repeating the sound. This will lay the foundation for the pronunciation of sounds and syllables in the child.

Parents need to know what a 4-month-old baby should be able to do in order to react quickly if a delay in their development can be spotted. While it is too early to panic one day after the child turns 5 months old, when this exceeds the milestone of six months, it is surely the time to be alarmed. Your eight-month-old baby is developing and learning about the world around them. It is a… 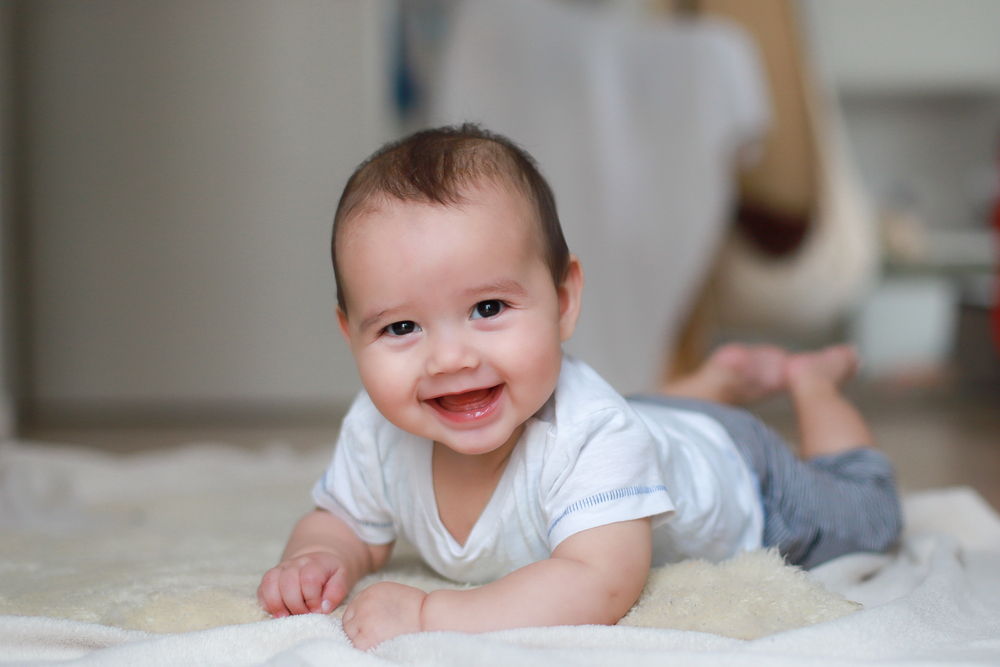 Baby milestones
What should a 5-month-old baby do?

The development level of a 5-month-old baby should consist of maintaining their physical skills, strengthening… It’s been like yesterday when your baby got into this world, but you’ll soon be…