The Most Popular Apps British Children Use: A Study by Find My Kids

Generation Z – modern teenagers – are the generation most adapted to technology in the history of mankind. They constantly spend time in front of their monitors and their smartphones are the main source of communication and problem solving.

But already nobody is embarrassed that most of the time the children don’t let their phones out of their hands. What are they doing? Find My Kids conducted a study and found out the most used apps by British children in 2018.

In October 2018 the service Find My Kids led a study. As part of the study we looked at app data from 1411 British children aged 13-16. The statistics obtained over the week (29/09 – 04/10) using our service, which allows parents to monitor the use of their child’s phone.*

* we comply with the data privacy policy and all data in the service is kept anonymous. This means that we have a general idea of what apps children use but we cannot relate specific data to a specific child.

All apps that children use can be divided into 3 categories:

Apps from this category are most used by modern children. With their help you can get useful information (YouTube), get news from friends and public figures (Instagram, Snapchat), listen to music (Spotify) and create our own video masterpieces (TikTok).

Children use these apps more often and for longer than apps from the other categories. The expected result is that on the weekend (Saturday and Sunday) children spend more time using entertainment apps than on the weekdays. YouTube is a 21st century phenomenon. All over the world children are spending a lot of time on it. In a 24-hour day we can estimate that 8 hours are spent sleeping, 6 hours at school, 2 hours doing homework then that leaves 8 hours of free time 12-13% (1 hour) is spent by children watching videos on YouTube. However, Britain is 7th in the ranking for countries that use YouTube the most often. Most of the time (around 83 minutes a day) is spent on YouTube by children in Indonesia. Surprisingly, games attract children less than entertainment apps. Only 4-5% of children play games daily. The most popular mobile game is Roblox, which children spend about 44 minutes on every day!

According the the statistics from the service every month the game is played by more than 56 million people around the world.

This is a 3D gaming platform, where each player can create their own universe, build roads, buildings, control their character and interact with other characters. The creators of the game position it as an instrument in the development of imagination and embodiment of fantasy. In its Parent Guide the creators guarantee that the game is safe for children and doesn’t contain violence or provoke aggressive behaviour.

However, specialists have determined that Roblox supports inappropriate and illegal content for children aged 13+.

For communication children use Facebook and WhatsApp. In this case the messenger is more popular than the social network. WhatsApp is used by almost half of children whilst Facebook is popular with only 16%.

Children use standard phone features much less than third party apps. They prefer to communicate in messengers, and don’t call or send text messages. Maybe this is due to the fact that messengers, unlike standard programmes support many modern multimedia features, without which we wouldn’t be able to imagine using the network (attaching photos, videos, audio, group chats etc.). Advice from Find My Kids

In order to always stay up to date with the apps that your child uses, use this life hack:

Install the app ‘Find My Kids’ and see: 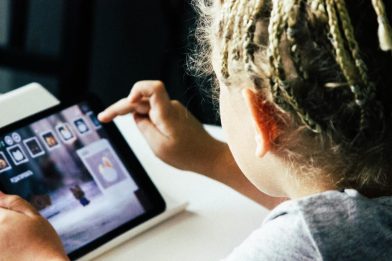 Statistics
Apps and Video Game Violence Statistics: Do They Really Cause Violence?