All about positive discipline

A native English-speaking writer who puts passion and forethought into every word.
Become an author In its definition, positive discipline is a method of parenting that functions on the premise that there are no bad children. Good and bad behavior exists independently of the child. Discipline should not carry a negative association, yet most of us immediately think of punishment when hearing the word. Shifting to a mindset that uses communication, encouragement and problem-solving gives children the best chance of success and a life filled with satisfaction.

What is a positive discipline? ‘Positive Discipline’ is originally a constructive parenting system developed by the renowned psychologist, Dr. Jane Nelson. Her program uses a basis founded from the studies of Alfred Adler and Rudolf Dreikus, presenting a methodology and philosophy that encourages positive, responsible growth, respect, and both the social and life skills essential to growth & success throughout life. With a structure formed for listening and communicating effectively, kids have a world of benefits open to them.

The basis of positive discipline parenting

Discipline has to be the most disliked part of parenting, but a good foundation of positive discipline is essential for keeping the bond between parent and child strong.

It is also a pleasure to parent in this way, with open communication and transparency, facilitating mutual goals and a healthy family environment. Your child’s core personality development is empowered, giving them the reasoning needed to thrive.

Positive discipline as a parenting philosophy is based around five basic principles:

Without negativity in the chain of communication, there is no disconnection between parents and their kids. The word discipline itself is derived from the Latin word ‘disciplina’ which carries a deep meaning. As a term of reference to self-control, determination, training, education, and knowledge, the concept certainly started a far way away from the frequent connotations to a punishment that it holds today. Positive parenting uses preventative measures to ensure that bad behavior does not arise. Children who “misbehave” are actually showing us that they don’t know how to behave due to being unable to process something that they feeling e.g. feelings of inadequacy, feeling unwanted, or feeling unaccepted. Once resolved, they’ll resort to constructive behavior patterns.

The only way that a parent can teach the right behavior is to strengthen the relationship in areas of confusion so that the young one can express the emotion that they don’t know how to deal with. With a positive relationship built and strong, this communication between you and your child begins to happen without intervention.

Why to avoid punishment

“Kids who see their parental figures as both emotionally responsive and realistically expectant of their needs are far less likely to engage in high-risk social behavior and misdemeanors. They also have greater social and academic success.”

Children don’t learn anything beneficial from negative discipline. Instead, they become focused on the parent’s anger which leads to difficulty managing emotions later in life. Anxiety can arise, as can excessive, irrational aggression, and depression. Punishment places the focus firmly upon what not to do instead of an empowering solution, or the lesson and growth derived. The only thing that punishment causes are temporary solutions and lasting behavioral and social problems.

Examples of negative discipline to avoid Parents employing positive discipline free themselves from the potential burden of guilt and anger experienced when nagging, yelling and commanding. Here are some of the prime ways that parents fall into the trap of negative disciplinary action:

Positive parenting techniques are extremely empowering. They give parents and their kids a new outlook on life. We learned together how to gain better control of emotions, and the consequent behavior often suffered when seemingly not thinking. My kids are less anxious and more proactive. They have a stronger connection to both of us as parents, while finally learning how to articulate even the most complex feelings when engaging. Conflict does not arise thanks to open, thoughtful communication,

Those who use positive discipline techniques deal with problems, calmly, friendly and respectfully serving as the ideal example of a balanced, open adult. The benefits support parent and child, and the symbiotic relationship. There are certain fundamentals that make positive discipline second-nature. Start by looking at an honest overview of how you and your family deal with uprising feelings. Unregulated emotions are often the by-product of an angry or demeaning parent who doesn’t understand how to communicate much better than their child. Speak only from a centered, calm point of being, instilling a sense of significance when you speak. Don’t talk down to your kids.

Establish clear guidelines for what behavior is tolerated, rewarding positive results while discouraging any form of negative behaviour in a clear, transparent manner. Your child needs to understand why what they are doing is wrong. Discuss goals and strategic planning. Aspirations are important, as are ample choices. Handling planning as a family will breed healthy communication skills and self-empowerment.

Positive discipline parenting according to age While the same advice goes for older kids as well, creating a safe environment that saves you from having to say “no” goes a long way with younger ones. Refusals create a need to convey understanding, and some menial aspects of everyday life (like safe areas in the house and storage) are simply better left protected, and out of sight until a later age.

Teach emotions from as young as possible using creative techniques to enlighten your kids. Start when they’re toddlers. Emotions charts work well and will be even more interesting if you’ve taken pictures of your children’s faces or your own. Older kids must be given devoted attention, teaching them vocabulary that allows themselves to understand and express themselves properly.

Communicating emotions needs to be taught and encouraged throughout a child’s life so that they don’t resort to anxiety, depression, anger, or ego in general.

Use a mediator frequently

A mediator is a positive discipline parent’s best friend. Mediate using fictional characters, dolls, and puppets when you’re dealing with young ones like preschoolers. Older kids need mediation support using events and prominent news stories to proxy difficult discussions. Speak in context to a variety of situations, and a range of different perspectives in order to help them place the reasoning behind your family’s choices.

The number one thing to craft all forms of parenting choices around is how positive discipline requires communication. You need to explain everything to your kids, in more than one context, and with their eager participation. Fostering an environment of self-discovery and learning builds intrinsic motivation while improving problem-solving, self-expression and social skills. Listen and communicate.

This being said, let’s take a closer look at some practical positive discipline techniques.

Build a relationship founded around mutual respect before focusing on anything else. – Encouraging mutual respect teaches children both kindness and innate respect in every situation. Kids develop into self-respecting adults who have a far clearer perception of ongoing situations and their own personal needs.

⠀
Look for the belief that the behavior is founded on so that you can inform and educate your child. – Children don’t simply act out. Once you understand their misunderstanding, communication allows you to change false beliefs.

Teach numerous problem-solving skills encouraging children to think and act for themselves. – Once children learn the fun of acting practically and taking self-satisfaction in creating solutions, they grow into proactive adults. Misbehaviour is far less likely when a child has a mind filled with potential instead of dread.

Contemplate disciplinary steps that teach your children beforehand. – Make sure that your solutions remain neither permissive nor incur punishment.

Offer parental guidance with a focus on solutions, guiding children away from punishment and guilt. – When you focus on negativity, regret, and mull on the past, your children develop a predisposition towards casting blame and feeling guilty. Action orientated advice with positive encouragement toward solutions should be the perspective for addressing all areas of life. Actively offer encouragement recognizing effort and areas of improvement. – Avoid praising children as this sets an attitude using an unhealthy contrast as a means for judgment but always encourage. Building long-term self-esteem and self-recognition through acts of empowerment is essential to balanced growth in both intellectual and social aspects.

Practice fun through doing. – Experiential learning is beneficial to both adults and their kids, teaching while strengthening the parental relationship. Create opportunities for new experiences, practicing new skills, discovering new hobbies, and acts of artistic expression.

Offer your kids choices. – Offering choices doesn’t mean giving away the reins. Instead, present children with two options leading to the same final conclusion. For example, instead of fighting with your son to put on his boots, offer him a choice of socks, and ask whether he’d prefer putting his jacket on before or after shoes.

A small choice represents massive independence and goes a long way towards expediting basic tasks without a fight.

Redirect negative behavior instead of refusing everything. – Once again, saying “no” all the time does nothing other than developing an ability to ignore refusals. If your child acts out, divert their attention to something positive. For example, in-store frustration or snooty demands should be met with bringing the kid in on the shopping process and perhaps asking them to pick out something that is needed in the cart.

Don’t fight every battle. – Now, we’re not suggesting that you ignore your kids flat-out, but some outbursts of negativity simply aren’t worth the attention. Don’t feed problems that are arising due to childishness. Kids learn to thrive on negative attention.

Positive Discipline in the classroom Children raised using positive discipline as the underlying philosophy thrives in a classroom environment. As long as a young kid has a positive relationship with their educator, they’ll assimilate lessons and skills with ease. This is mainly due to having a solid framework of expression, therefore understanding the emotional reasoning behind the lessons taught. School is freed for learning academic lessons, with matters of the heart handled at home.

Parenting using positivity raises kids with healthy self-respect. This means that they’re used to being listened to, giving equal respect to their teachers and colleges.

Stay positive, keep up the discipline

Positive discipline takes a lot of listening, and a whole lot of explaining but the happy growth of a child who values him or herself and the family is worth it. Later in life, your little one will flourish into a beacon of positivity who never has to suffer under extreme stress, anger or anxiety. With a clear perception of the present, your kids are empowered for the best possible future. 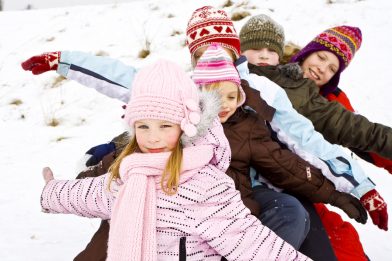 When the temperature drops outside, many parents begin looking for fun activities to do as…

Winter in Europe is not often associated with very low temperatures, however, humidity levels and… Summer is the most awaited season of the year for both children and their parents….