It’s 2020 – do you know what your kids are up to online? Are you aware of the most dangerous apps for teens and kids and do you know if your child is on them? It is critical for parents to educate themselves regularly on any new apps that could potentially cause harm to their children.

These days, it is easier than ever for children and teenagers to stumble into trouble online. Older teens may even deliberately be seeking out sexual content or engaging in other inappropriate behavior online such as chatting with unknown adults. For parents, the thought of your child getting into things they shouldn’t – either intentionally or unintentionally – is horrifying.

Thankfully, there are things you can do to help prevent a tragedy online. Parents need to know what their kids are up to and being aware of which apps to look out for is a crucial part of keeping them safe. Let’s go over some of the most popular and most dangerous apps that kids and teens may be accessing without your knowledge. 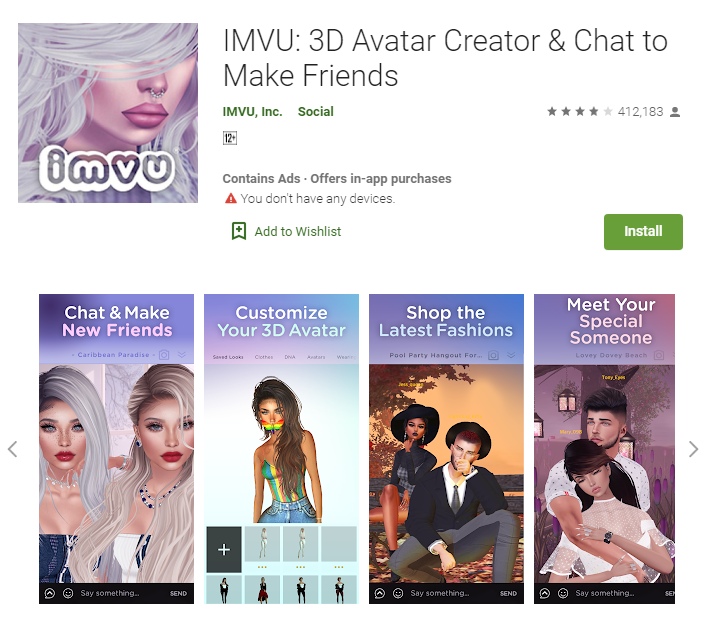 Avatar-based games and apps like IMVU are especially dangerous for children and teens. Role-playing of all kinds, usually sexual, takes place in a virtual world with virtual characters. Users can chat with others all across the world while interacting with their avatars. These chat rooms are unmoderated, and bullying is rampant.

Like most apps these days, the conversations inevitably turn towards sex. Female users are likely to get bombarded with unwanted messages, no matter how old they are. Clothing is intentionally skimpy, and much of the app’s marketing is focused on “love” and “romance”. 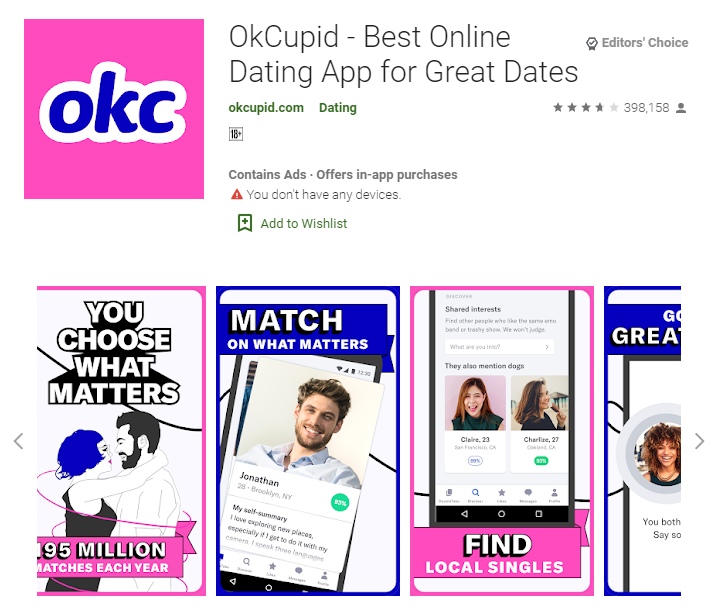 Older children, especially those in their awkward teenage years, can easily be tempted into wondering how attractive they are to the opposite sex. Apps like OkCupid allow users the ability to match with others by taking personality quizzes and filling out a profile. These matches are intended to help users find compatible people to date.

Using the app may seem like harmless fun at first to many teenagers and even younger children. However, like any dating app, there is a major potential for exploitation by older adults, sexual predators, and even other teenagers their own age. Sexting, the solicitation of sexual meetups, and the transmission of inappropriate content are all common on this platform. 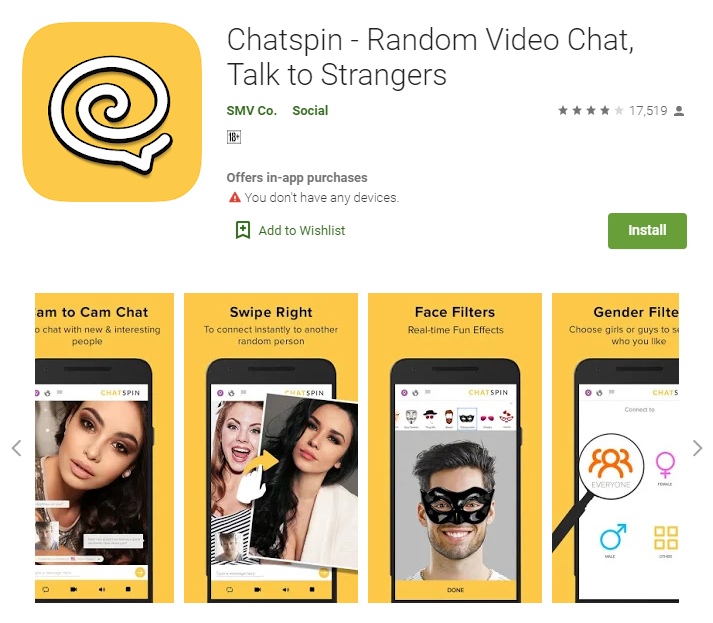 Random video chat apps have unfortunately become a popular pastime with many bored young adults and teenagers, typically in group settings such as a party or sleepover. This app matches users with random live video feeds from other people.

Children can easily be exposed to real-time sexual content in a matter of seconds, including unwanted sexual advances by adult predators. These random webcam apps and websites like Chat Roulette are extremely dangerous and inappropriate for anyone under the age of 18. 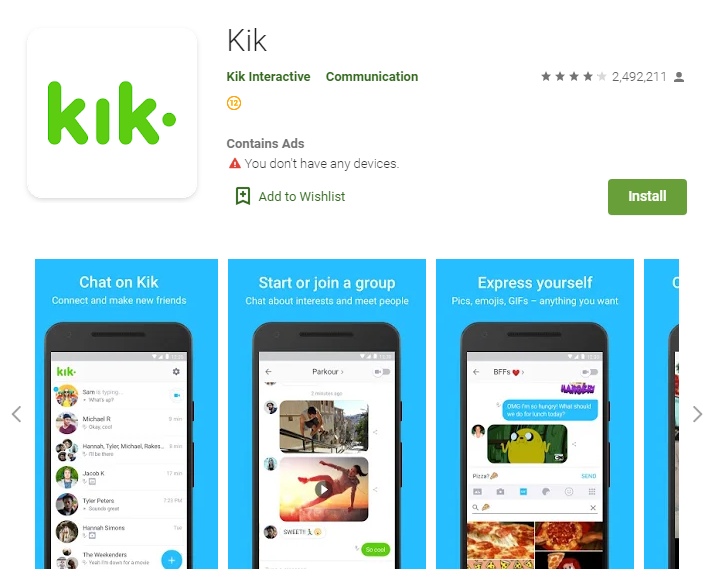 Kik is a messaging app that has been incredibly popular in recent years especially with teenagers. As a mostly anonymous app, users do not have to verify any information to create an account and username. This makes it very easy for predators to get easy access to children and it is very common for people on Kik to lie about who they are.

Photos and videos can be sent through the app as well, making Kik a very popular platform for anonymous sexting and sexual predators. Thousands of kidnappings, assaults, and even murders have been linked to messaging relationships that began on Kik. In fact, this app has been involved in more than 1,140 child sex abuse cases just in the UK alone!

There is absolutely no reason for your child to be on the Kik app. There are much safer messaging apps for kids such as Facebook Messenger For Kids which allows kids to message only those users who their parents have approved and who are linked to their own parent’s account. 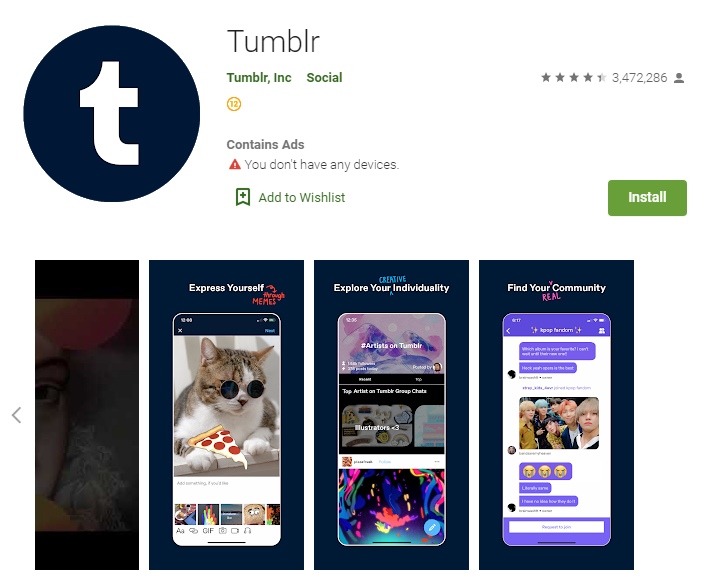 Tumblr is very popular with teenagers in their high school years. As a “micro-blogging” platform, users can share content of all kinds from their own personal page.

Unfortunately, the culture on the platform tends to lean towards darker themes of anxiety, depression, drug use and self-harm. It is often used as a creative or expressive outlet for teens to explore these issues and other topics including body image, sexuality and relationships.

Needless to say, other teenagers are probably not the best source of advice on these topics, especially when it comes to suicidal thoughts, and parents should be at the forefront of these conversations with their kids.

In addition, all profiles are public and sexual content is easily accessed on the site. Profiles are not verified or monitored, making it easier for adults and predators to message kids. 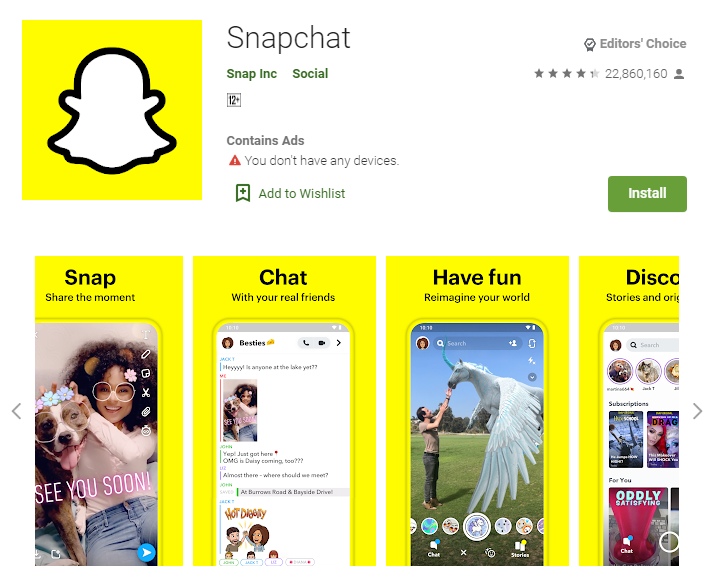 Snapchat has garnered much attention in the media and from concerned parents due to the nature of its disappearing messages. Snapchat allows users to send temporary text messages and media content to their friends. Many kids and teens secretly use the app to evade the watchful eye of parents who monitor their text messages.

Kids can also use the app to send each other photos and videos they don’t want parents or teachers to see. For example, a user may send out nude photos of a classmate to all of their school friends because they know it leaves no trace.

Although decreasing in popularity in recent years, Snapchat still has a sizable user base and is a very tempting app for teenagers who are up to no good. 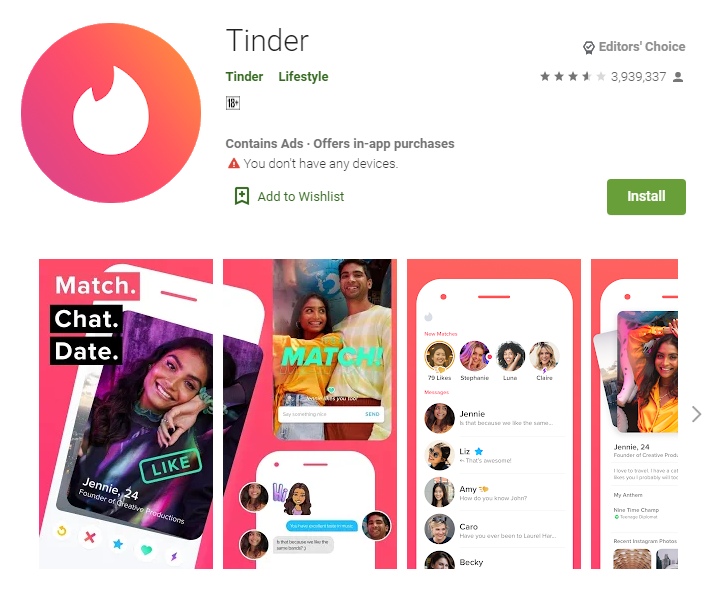 Teenagers, especially those with some independence such as jobs and vehicles, can easily fall into dating apps like Tinder. Tinder is wildly popular with many young adults and promises to match users with the dating partners of their dreams.

Unfortunately, apps like Tinder are known hookup sites and also used by predators. Since the minimum age is supposed to be 18, your child could easily come into contact with someone over the age of 18. Often these sites fail to have consistent or effective age verification measures, leaving teens vulnerable.

Even if they are only connecting with others their own age, the casual sex culture encouraged by this application is probably something you don’t want your teenager involved in. Seeing an app like Tinder on your child’s phone should prompt an immediate conversation and probably removal of their phone privileges. 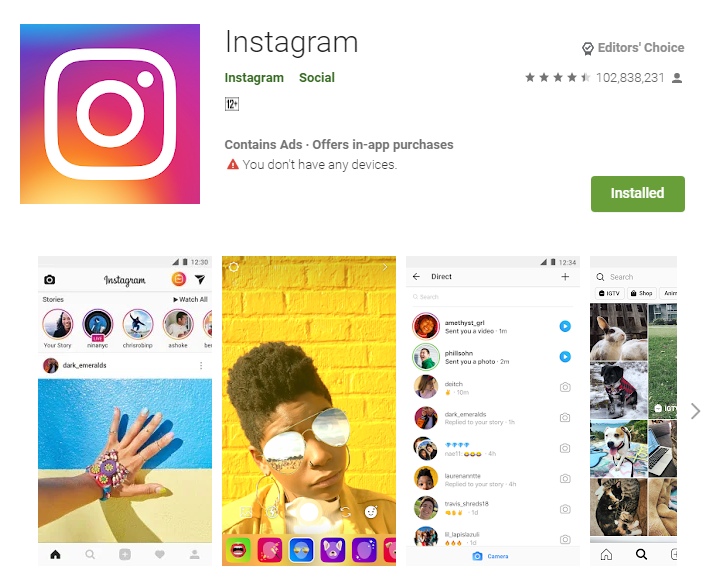 Instagram connects users primarily through the use of hashtags, and profiles consist of photos and videos only. Finding inappropriate content posted by strangers is shockingly easy through the use of these hashtags. Instagram is also a common platform used by pedophiles to contact young children and teens.

Of the 3 most popular social media apps, Instagram is the most dangerous for kids simply because their demographic is on it. Most children and teenagers have no interest in more mature social networking platforms like Facebook or Twitter. In addition, Instagram is more visual than the other brands, making it much easier for your children to be exposed to sexual content and other inappropriate images. 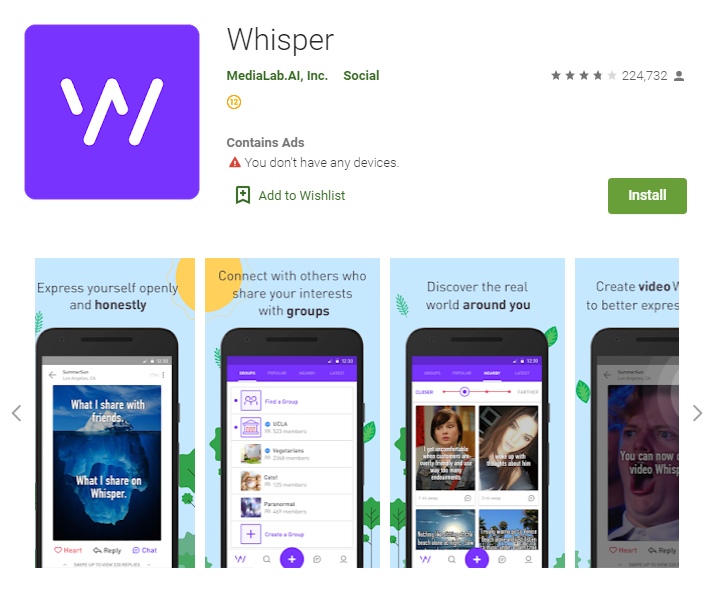 The Whisper app is heavily marketed to young adults and teens, describing itself as a place for people to share their secrets. With no names, locations, ages or any information needed to create an account, there is no user verification. One recent count found that there were over 1 million users of the app who self-identified as being 15 years old.

As an anonymous social platform, Whisper is an extremely dangerous app for kids and teenagers. Not surprisingly, many of the posts are centered around sexual behavior and even soliciting sex. It should go without saying that any app that allows people to post anything they wish completely anonymously, does not belong on your child’s phone. 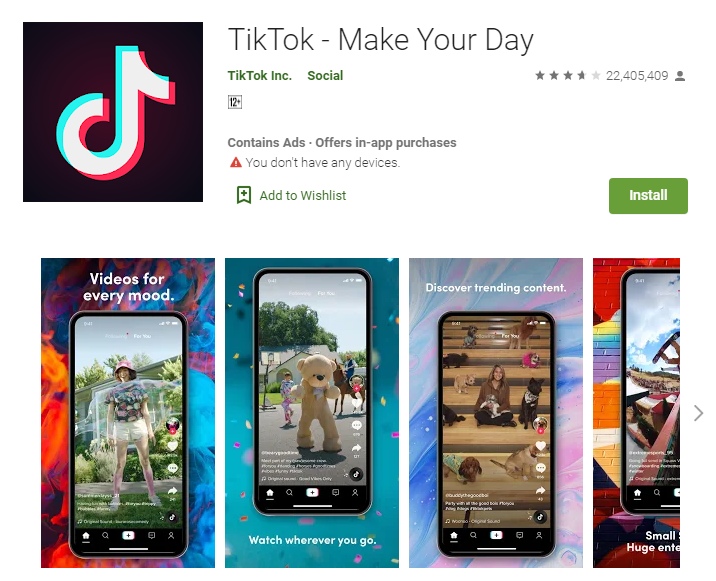 While younger children and even teenagers may not have heard of the other apps on this list, most kids these days have heard about TikTok. Peer pressure is often a great factor in your children’s decisions online. Even if they do not download it themselves, they could easily access it from a friend’s phone.

TikTok shows users short viral videos covering a wide variety of topics and pop culture memes. Because of this, many videos are not appropriate for children and teens. Videos showing profanity, violence, sexual content and other inappropriate behavior such as dangerous viral challenges are common.

In addition, the lack of effective privacy settings on the app makes it possible for any stranger to message your child. Although the minimum age to sign up is 13, the platform takes no steps to verify this, making it a known tool many online predators use to meet young children.

How Parents Can Protect Kids from Dangerous Apps

Parental supervision, knowledge and awareness is the best way to prevent exposure to dangerous content and behavior online. Knowing the worst apps to look out for is a great start.

If you are the one who sets up your child’s phone account, you can also set restrictions such as placing password protection on the app store, preventing unwanted downloads in the first place.

But even the most devoted parent can’t physically monitor everything all the time, especially in households with multiple children or where both parents work. Older children and teenagers who take their devices to friend’s homes, activities, work or school also have ample opportunity to disobey the rules.

In addition, many teens these days know their way around their mobile devices better than their parents do! They know all the tricks such as hiding apps within other folders or uninstalling and reinstalling them to hide from a watchful parental eye.

So what is a concerned parent to do? That’s where parental control and supervision apps like Find My Kids come in. In addition to GPS location tracking, the Find My Kids service can even provide usage statistics (on Android devices) so parents can monitor what apps their children are using and for how long. Download it right now from the GooglePlay or AppStore.

GPS watches are also available for parents who want to be in contact with their kids but don’t want to give them access to their own phone just yet.

It is also important to have an open dialogue with your kids on many subjects, including the topic of internet safety. Communicate regularly with your children. Ask questions and show interest in their life, friends and activities.

Most importantly, encourage them to come to you at the first sign of cyberbullying, cyberstalking, or any other inappropriate behavior they run into. Make sure they know they can ask you about any questionable content they may see.

Regular discussion about internet conduct and smart usage of social media is key to keeping your kids safe online.

Keeping kids safe online is of the utmost importance, especially as more and more apps where predators could potentially lurk are developed. As current technology outpaces the knowledge and skill of older generations, extra parental vigilance is required in order to keep up with the new digital world inhabited by today’s tech-savvy kids and teens.

This list of the top 10 most dangerous apps to be aware of is a great start to keeping kids safe from internet harm. Parents must also consider the use of parental control software or services – such as the Find My Kids app – in order to keep their children safe even when they can’t be there.

Let us know, what are you doing to ensure your children are safe online? There’s no doubt about it; your child will want a cell phone of their own…. In this modern age, the technology boasts many amazing benefits, including providing you with the…